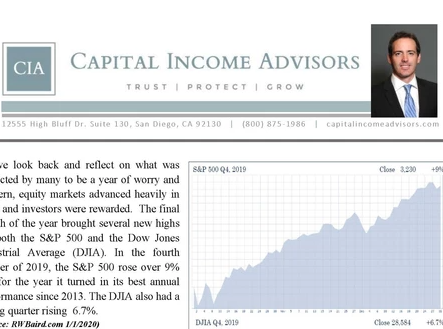 As we look back and reflect on what was predicted by many to be a year of worry and concern, equity markets advanced heavily in 2019 and investors were rewarded. The final month of the year brought several new highs for both the S&P 500 and the Dow Jones Industrial Average (DJIA). In the fourth quarter of 2019, the S&P 500 rose over 9% and for the year it turned in its best annual performance since 2013. The DJIA also had a strong quarter rising 6.7%. (Source: RWBaird.com 1/1/2020)

If someone had told you on January 1st of 2019 that the year would start off with talk of a global economic recession that might take the U.S. economy down with it, add to that, the U.S. would be in a trade war with China and the President would get impeached, you might have wondered how much equity markets would retreat. Some felt that 2019 was going to be a challenging year for stocks with volatility taking center stage.

Well, there was no Bear Market in 2019, and for that matter, there wasn't even a correction. A correction, or 10% drawdown, isn't uncommon for the stock market. In a year that had no shortage of headwinds, the maximum pullback was less than 7%.

fourth quarter. Optimism about the U.S. economy improved and investors also saw potential trade developments. During the fourth quarter, the U.S. reported that the economy grew just above 2% in the previous quarter, driven by healthy consumer spending.

Employment numbers continued to impress analysts with an average addition of 205,000 jobs per month in the fourth quarter. Unemployment closed the year under 3.5% with limited wage pressure. On a negative note, businesses were reluctant to invest in 2019 and manufacturing contracted in December to its lowest level since 2009.

2019 ended on a high note for investors, unlike 2018, where just about everybody was questioning the stability and the possible end of the Bull Market. After this year of strong returns, analysts are still mostly bullish, but they are predicting modest gains for 2020.